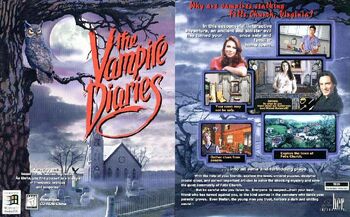 In this suspensful, interactive adventure, an ancient and sinister evil has turned your once safe and familiar home town into an eerie and forbidding place.

With the help of your friends, explore the town, unravel puzzles, decipher crucial clues and collect important articles to solve the shocking mystery and save the quiet community of Fell's Church.

But be careful who you listen to. Everyone is suspect... from your best friend who has turned against you, to the kind woman in the cemetery who tends your parents' graves. Even Stefan, the young man you trust, holds a dark and chilling secret!

It was released by Her Interactive in the 1990s and was loosely based on The Vampire Diaries. It should be noted that the crazy plot for this game had very little to do with the actual books. They share the names of a chunk of the characters, town and vampires in common, but everything else is completely different.

Not the best quality trailer out there, but it does convey the... hilarity of the game.

Elena is the heroine of the story, and it's from her point of view that you play the game.

Stefan works as a nurse at the local hospital. He also holds a dark and chilling secret!

Damon masquerades as a biology teacher at Robert E. Lee High School. He roams the halls after dark, looking for necks to bite. He also sports an amusing hairstyle.

Elena's best friend, psychic, and droooo-id. Bonnie is working for Gary Richards, and helps out by translating runes in her spare time. She also bends spoons.

Caroline is Elena's ex-best friend, and source of general bitchiness. She works for Mikhail at the new art gallery in town.

The mysterious and slightly batty old lady who does a lot of gardening, and gives Elena some cryptic clues. It seems that Mrs. Flowers has also taken up lurking in graveyards as a hobby.

Aunt Judith is Elena and Margaret's guardian. She spends most of her time in the hospital, wringing her hands at Margaret's bedside.

Elena's little sister. Margaret is hospitalised early on in the game, a victim of the menace stalking the town, and stuck in a coma.

Mrs. Grimesby is the town librarian, and a source of local information.

Gary seems to be a stuffy guy with a private collection of artefacts that are of some use in the game.

The owner of the new art gallery in town. Like Stefan, he also harbours a dark and chilling secret, and it's far worse than Stefan stealing some O-negative from the blood bank on the sly.

The only reference to Matt in the game is a Valentines card from him in Elena's room. At least in the book Elena bothers to break up with him before she chases after Stefan. In the game, the card is the only time she even thinks of poor Matt (and that's only if you look at it!) before swanning off after Stefan at the end.

Meredith was really supposed to be Elena's best friend in the book, and is just as absent as Matt is. She was obviously cut because there was just no need for her in the scope of the story of the game, alas.

With Stefan being all sensible and playing nurse in the hospital, he never attacked Tyler and the guys in the Quonset hut, Damon never killed Mr. Tanner, and so poor Alaric was never called in. I guess he never finds his proof of vampires in this version of the Vampire Diaries world. Maybe he meets the mysteriously missing Meredith somewhere despite this.

It seems that Katherine doesn't actually exist within this game. Her role as antagonist have been replaced with that of Mikhail, and the story of the Big Bad is completely different, along with Stefan's reasons for being in Fell's Church.

Without a Katherine, there's no reason at all for a Klaus. Which is a shame, because he would have made an awesome final boss.

Given that Stefan actually got up the energy to grumble (and he's usually such a polite boy!) about the thing in the books, it's a character in its own right, and it is sorely missed in the game.

The game is no longer in print, though it was up on a couple of Abandonware sites a while back. Some fans who own the game will sometimes copy it for other fans for this reason.

It should be noted that this wasn't designed to play on NT systems, so you either need to play it on Windows '95, '98 or ME, OR fiddle around a bit in your computer settings and keep your fingers crossed. If you're lucky, the following should work: Right-click on the shortcut to the game, go into Properties, and tweak the compatibility modes to something that works.

Retrieved from "https://lj-smith.fandom.com/wiki/Vampire_Diaries:_The_Game?oldid=4273"
Community content is available under CC-BY-SA unless otherwise noted.